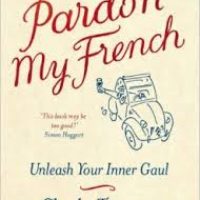 Even before France was France, outsiders have been traveling here and then writing about their experiences. Unintentionally and at a time when I had no interest in France, I read one of the earlier books in this genre: in Charles Joyce’s first year Latin class, seventh grade, our first text was from C. Iulius De Bello Gallico, Caesar’s Gallic Wars:

Caesar then goes on to describe the inhabitants of the three parts: the Belgae, the Aquanti (Celts), and the Gauls. It might be stretching it to call an invasion a type of travel, and Julius Caesar’s writings travel writing (I doubt Lonely Planet would want him as a contributor), but he does describe the peoples and lands of the places he travels to, and then how he defeats them in battle, but only after breaking camp and a series of forced marches.

Skipping ahead several thousand years, there’s been an invasion of a different sorts, slightly less violent than those of the Romans, by legions of English speakers, mostly British, coming to France, although we may include Americans going to Italy, observing, pondering, ruminating, then writing it down, and thereby creating an Anglo-Franco travel book publishing industry. To my knowledge the opposite has not occurred: adventurous or masochistic French travelers venturing to England, setting up in a manor or cottage for a year or so, then writing it all down for the folks back home. But perhaps this is simply an untapped market, and the French readers are genuinely eager for titles such as Sous le Soleil Shropshire (Under the Shropshire Sun) or Une année à Wokingham (A Year in Wokingham).

Except for that Latin stuff, my own readings about travel to France have been mainstream and relatively recent: Peter Mayle’s A Year in Provence and Encore Provence, Richard Goodman’s French Dirt,  and Thad Carhart’s The Piano Shop on the Left Bank.  I enjoyed Stephen Clarke’s Merde series, e.g. A Year in the Merde  – his low brow, contrarian style (i.e. not Mayle) hits the mark, at least with this reader; and most recently, desperate for books in English and willing to read some chick lit, I got from an English friend a few books about English women seeking liberation and love in France, but usually getting into trouble and not finding what they were looking for: Annie Sander’s The Gap Year for Grown Ups and Karen Wheeler’s Tout Sweet. Last, and perhaps not quite under the same category as the others – what Nicholas Delbanco calls intentional travel writing1Highly recommended is Delbanco’s ...continue, is Ernest Hemingway’s A Moveable Feast. All of the above are written such that the reader need to have been to France to enjoy these books, but perhaps having seen the movie Chocolat might be helpful.

Charles Timoney’s Pardon My French is a different type of travel book. Although it does explain expressions on subjects that tourists might find useful – cuisine, entertainment, and history, its ideal reader is the initiated and somewhat localized foreigner, who is in France not as a tourist, but instead for some other misguided reason: love, work, education, or simply something different to do.

It’s not a new book – the edition I have, loaned to me by some Greek friends (whose apartment has one huge wall with the biggest residential bookcase I’ve seen in years), was published by Penguin Books in 2007. And like the other books described above, it’s about a foreigner, in this case an Englishman with his French wife, living in Paris. Yet what sets it apart is the nature of the material: a glossary of French terms, titles, expressions, and concepts that you are certain to encounter when you live here, and are essential to understand, yet are difficult to impossible to grasp, at least at first view. This is a book best enjoyed by those etrangers who have lived in France for several years, and even better have also worked in a French office, and finally have children in the school system here, especially at a college (middle school) and lycée (high school). The items he selects to describe and the manner in which he does so certainly mirrors our experiences here.

Timoney’s begins, fittingly, with a section of terms about French food and drink, starting with the term Apéro, which is perhaps a distant relative of the North American cocktail party, something that belonged to my mother’s generation, and the likes of which I had never seen until we arrived in France. There are several variations of the apéro, depending on the venue: at work, after work, or at home, the last of which captures our experience with the apéro over here:

The ultimate apéro, which can rival a meal, is something called an apéritif dinatoire. If you get invited to such an apéro you can expect the drinks to be accompanied by several types of hot food and there should even be something sweet at the end.

At our first apéro we were stunned by the amount of food served: tray after tray of little bit sized delights, and drink after drink, starting with Champagne from an unknown, small production vineyard, followed by red wine then the unavoidable digestif, cognac. It was convenient we were sitting on a couch and not at a dining table  – a decided advantage of an apéro. Certainly there were as many, if not more, calories served and consumed at the apéritif dinatoire as at any normal sit down dinner.

The food and drink section of Pardon My French also covers degrees of meat cooking or cuisson: bleu (seared one-tenth of a second on each side) saignant (bloody), à point (medium rare), and bien cuit (well done, and illegal in France); the various manners of getting water at a restaurant (gassy or not?); and the common but first time confusing French version of ‘will there be anything else’ or et avec ceci? Who and what with Cici?

In the section about geography Timoney highlights a concept that I came across recently in helping Catherine with some of her school work: children here learn in elementary school that the borders of France give the country the shape of a hexagon, and Timoney writes that ‘if you close your eyes and let your imagination loose… that such a notion is not that far-fetched.’ In Catherine’s notebook there’s a map of France, an explanation about the distinct geometrical configuration of the country, and and labels on the country’s borders, or sides of the hexagon if you prefer, named not AB and BC, but instead labelled Alsace to Monaco, Monaco to Spain, and so on. Supposedly the French will sometimes refer to their country as l’hexagone, but except in Catherine’s school book, I’ve never seen or heard the term.

There’s a short but extremely useful section about the French educational system – this section alone justifies the purchase price of this book. The first concept Timoney takes on is the Bac, or le Baccalaureat, a concept that eluded us for some time, despite hoping that the two teenagers in the house, who had been to colleges and lycées in both Marseille, La Garde, and Hyeres, would be able to explain the system behind the exam that is taken at the end of high school, which the English call the A levels and the Germans call the Abitur. In hindsight, asking a teenager etranger to explain some convoluted French educational system was a bit unfair. Happily, in less than one page Timoney cuts through this French Gordian knot:

You can select between three main types of Bac – Bac S, Bac ES, and Bac L – but, whichever you choose, you will study a wide range of at least eight subjects.

Timoney summarizes the particulars of each Bac, noting that scores are based on a mark of 20 and that even a sports exam is factored in as a part of the final grade.

In several cases Timoney selects examples that demonstrate French words or expressions that cannot be easily constructed in English. If I may detour slightly here: these French expressrions reminded me of an elementary German class, freshman year at the university, when called upon to translate Der Einbeiniger, the professor, Frau Doktor Doane, grew impatient and said, “The one legged man.” I had got the one legged part, but just as I was about to ask how she knew the noun should be man, the answer came to me: the gender of the construction indicated a man or woman, removing the need to write Der einbeiniger Mann (Die Einbeinige is a one legged woman). This efficiency with regard to number of words used, and the introduction into my vocabulary of such words as Doppelgänger, geheimnisvoll, and when not playing a particular section very well, a piano teacher said to me, ‘Das muβt du ochsen’ – it was curious, and at a relatively late age finally understood the merit of borrowing from foreign languages to express concepts and ideas that have a certain je ne sais quoi.

Of course there are other foreign expressions, also understood and useful, even if there are no easy or direct translations, such as for Gemütlichkeit (my Langenscheidt’s lists as translations comfort, friendliness, cosiness, informality – close but these don’t really capture it in English) or bon apétit (good appetite? enjoy your meal? there’s nothing really quite the same in English).

La rentrée is one example, and one which parents of school aged children know – the return to school:

In its literal sense la rentrée corresponds to the notion of ‘going back to school’. French people can’t understand how we manage without a proper single word to describe this event as they have. In shops you see signs urging you to buy school supplies and children’s clothes ‘pour la rentrée‘.

La rentrée captures the back school event itself, the time period from the end of August until mid-September, and an entire shopping season. Another curious linguistic habit calling people by the name of the city they live in. Under the heading Adjectif:

…wherever you come from, there is an adjectif ready and waiting to describe you. Dictionaries show lists of the principle ones, some of which you can guess, like Parisien for Parir and Lyonnaise for Lyons.

This had baffled me for months – when I read in the town newsletter about local citizens or ‘Gardiens‘, I wasn’t sure if the article was talking about a police auxiliary force or something else. But it’s unclear how well the concept travels: it is certainly fine for the residents of Olympia or even Altoona, yet it’s unclear how one would label citizens from say Tampa Bay or Wokingham.

Of course there’s more ground to cover: the fonctionnaires you must deal with to get your carte de séjour; the correct use of merde and oh la la; why you call the fire brigade (les pompiers – dial 18) when you need an ambulance; the origins of fnac; what HLM means, and bien plus encore (much much more). Pardon My French is essential reading for foreigners residing in France, yet as I read through the book, each section recalled some annoyance or other about life here, and while the book was funny, I also felt the urge to pack up and get out. As it happens, the antidote was another bit of travel writing, recently read. In Elizabeth Clark’s The Oysters of Locmariaquer, in the first chapter, describing the French philosophy with regard to oysters in particular, and food in general, the author writes:

You are in the country of the art of good food, and this dégustation [savoring] is very like what you do in an art gallery, unless your soul is lost; it is essential to be hungry but impermissible to be merely that; you have to take your time, the imagination must work; the first rule is to pay attention to what you are doing.

Let us pay attention to what we are doing and keep our souls.