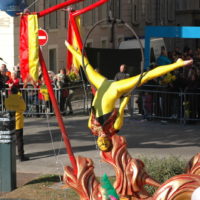 With a child in elementary school here, May and June became the season of shows – there’s been about six so far this year (several at her school, at the Music Conservatoire, and at her circus school). Last year Catherine had  just one show at her school, and another one at her dance school – Ecole de Danse, here in La Garde, run by the exceptional Marie del Castillo. The Ecole de Danse year end show was a production of Roxelane et Soliman, held in a large hall at the Casino des Palmiers in Hyeres. The show started at 9:00pm and didn’t end until 1:00am. It was fantastic: the entire troupe of the ecole was there, from the little kids up to adults, performing modern jazz, flamenco, funky jazz, and of course, classic dance – ballet. Especially impressive was Mme. Castillo herself dancing with the troupe in various numbers: she was fluid and fluent across all the dance styles; the routine she seemed to most enjoy was with the young teenagers from the funky jazz class  – those kids had nothing on her.

Yet this last Fall we did not re-enroll Catherine in the dance school. During the past summer Catherine spent a week at a circus camp run by Regard en Haut (look up there), and after seeing her experience there we decided to put her in a once a week circus school class for the school year. Our thinking was that while there are a lot of good dance schools, both here in France and in North America, a circus school is rarer, and a bit different. Certainly the skills required of the two disciplines were similar – balance, coordination, rhythm, flexibility, etc., but there was something appealing about the circus school, something fun and mischievous, that the dance school lacked.

Our first encounter with any circus school was in 2009, when we spent four weeks on vacation in Nice, during a hot late July and early August. Every few days we would take a train trip to a different town on the Côte d’Azur, spending the days exploring and then returning to Nice in the evening: Antibes, Cannes, and so on. One trip took us to  Saint–Raphaël (we had read there was a sandy beach – an exception in these parts), and while walking back to the train station, we crossed a square where a large red tent was set up, and inside were children performing a variety of tricks and acts. It was intriguing and fun to watch the kids rolling on the large balls, juggling, and performing on the trapeze. In researching for this post I learned that this was the Ecole Francaise de Cirque, whose web site is here (the video on the home page is a good overview of what Catherine did – don’t worry about the French, I never do).

Since last September, Catherine’s been in a Tuesday afternoon class run by two instructors, Fabrice and Celine, from Regard en Haut. In the gymnastics hall at the Complexe Guy Moquet here in La Garde, they set up a low to the ground tight rope, large balls to walk on, juggling things, a trapeze, and all the other fixtures needed for a circus class. Catherine enjoyed the class, and practices cart-wheels in our small living room, narrowly missing the television.

Over the years, as movies became predictable, television shows unwatchable, and good live music in pleasing venues were hard to find, I was always on the lookout for some unexpected entertainment. Sometime back a particular circus became one of these. My first Cirque du Soleil show was in the mid 1990’s, and was Alegría, set up under a yellow and blue stripped tent in downtown San Jose. I wasn’t sure what I was expecting from the show, because previous circus experience had been something like Ringling Brothers – nothing memorable at all. I wasn’t sure what to expect before Alegría, but afterwards I had a number of thoughts. Is it too late for me to join that circus, in any capacity? Does the woman who did that acrobat act have a boyfriend? How did they do that? Where did they come up with that music? How can I turn my life into some sort of personal, continual Cirque de Soleil? I saw Alegria again a few weeks later, and would later see Quidam, in San Francisco, and while at a technology conference in Las Vegas, Mystère, a non-travelling show at the Treasure Island Casino.

The memories of the shows run together: as everyone is getting seated for the show, a clown runs through the audience mussing people’s hair or taking their glasses; the acrobat performing with the metallic cube; the dusted in flour, Teuton balancing man and woman; the clown birds on a wire; the big baby; the woman acrobat in the suspended red curtain; and of course, the live music. The best music might be the taiko drum routine in Mystère, which starts off with a lovely violin. You can hear it here. Here is the official video preview of Mystère.

There were no taiko drums at the Regard en Haut’s year end show for Catherine’s class, but the music on the sound system was similar to that of CdS the pleasing, complex yet with just a hint of a French cafe sound. The younger kids balanced on balls, walked the tightrope, cart wheeled, rode the indo-board, while the older kids juggled, rode unicycles, did trapeze and suspended curtain routines, and one boy in particular was quite good at aerial moves off a spring board.

We’re signing Catherine up for another year at Regard en Haut, and in the meantime she continues to do cartwheels. And I keep thinking about an inner and outer life of athleticism and funny hair and rhythm and aerials and humor all set to a taiko and violin soundtrack.

On a recent Saturday we were at an indoor kid’s warehouse + funhouse, where there was a birthday party for a friend of Catherine. Some of the parents stayed the entire time, talked, and drank rosé. While we were there, the staff cleared away a stage area, and another group that was there, about fifteen girls, aged eight through about seventeen, put on a different kind of show.

If you’ve seen those pageants where parents dress up their five year old girl to look like adult beauty queens, you know where this is going. The girls performed a number of dance routines, with a few costume changes, some of which were fun, and some of which were not appropriate – imitations of jiggling and strutt’n and prancing. It was awkward to watch, but turned bizarre when a pole platform was brought out, and each of the girls danced a routine on the pole.

What’s the root of all this? Certainly France has its share of chauvinism, and like the United States (unlike England – think Margaret Thatcher, or Germany – think Angela Merkel), it will be at least another generation before a woman becomes president. But what are the parents thinking? What kind of people do they want their daughters to be? Maybe they don’t see any connection between these activities and how a girl might see herself. And maybe I’m wrong, maybe there’s no connection at all. But in thinking about what I want for my daughter, how about instead of strippers and pole dances, there’s a better set of role models and corresponding activities –  I’m thinking Grace Hopper (computer science – let’s have a girl hackathon) or Natalie Coughlin (sports – swim meet!) or Alice Munro (literature – short story reading!) or Vera Wang (fashion – fashion show!) or Elena Kagen (law – debate session!) or Carol King (music – concert!). If it was to be dance, let’s aim high – Martha Graham or Margot Fonteyn.

And if she’s going to run away and join the circus, it damn well better be Cirque de Soleil.