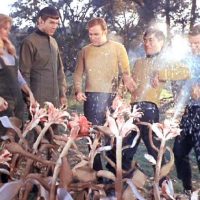 In the original Star Trek series, “This Side of Paradise” (season one, episode twenty-four), Kirk, Spock, and there rest of the crew of the Enterprise are made stupid/happy after being shot by some spores of a plant that alters their behavior. I felt the same way after spending some time on the Fox News website, and other low IQ sectors of the internet. After visiting these sites, I realized that not only did I not need to wear a mask, but so many other things  were a waste of time.

Now it was all clear to me. I’m here to make it clear to you.

Don’t use condoms; she won’t get pregnant if you pull out. And there’s no need to worry about the spread of sexually transmitted diseases, because STDs are a deep state/new world order plot fomented by a secret cabal made up of George Soros, Hillary Clinton, random Jews, certain Muslins, the Rothschilds, some dim Illuminati, and Barney.

Don’t get vaccinated. The government is really injecting microchips, and it’s all a lie anyway: have you ever seen anyone with polio or smallpox?

Save money by sharing single use medical supplies such as syringes, tongue dispensers, breathing circuits, bed pans, and hospital bed linens. Never forget that Lister was a limey.

That ‘sell by’ date on the chicken? Fuggedaboutit! And don’t worry about about washing the vegetables. Never forget that Pasteur was a frog.

Distancing? Is that really necessary? You can stand as close as you want as you ignite that unlabeled firework you bought in Ciudad Juarez.

You don’t need to be belayed.

You don’t need a backup chute.

Don’t use your surfboard leash. It just gets tangled up between your feet, and it’s unlikely you will lose your board or if you do, that it will hit another surfer.

You can ignore the first rule of firearm safety: like hell anyone’s going to tell you what direction to point your firearm in. Don’t let the poindexter rangemaster tell you what to do.

Sunscreen is for wimps.

You don’t need computer virus software, firewalls, or backups. It’s okay to click on that link in that email from *.ru.

You don’t need seatbelts; that’s just the government and the insurance companies telling you what to do. You’re better off being thrown clear. Deactivate your airbag so you have a clear shot through the windshield.

Anti-lock braking systems were simply a way for car makers to charge more; ‘stomp and steer’—right.

Speed limits are yet again the government telling you what to do. Drive how you like.

You don’t need to use turn-signals. Keep’em guessing.

You don’t need child seats, baby monitors, baby cameras, and all the other crap pushed by the baby industrial complex.

Pre-op and pre-flight checklists take too much time.

Fortunately Annie saw what was happening to me as I surfed from one site to another. She came over and dramatically slapped me across the face until there was a Kirk-like, thin rivulet of blood coming from one side of my mouth. I came to my senses.

No one wants to wear a mask, but happily, most people have the scientific literacy, discipline, and consideration for their community to tolerate this small annoyance. It’s stunning that some people do not. If you think wearing a mask is an affront to your liberty, a hardship, and a form of tyranny, vacation in Pyongyang, or read To Destroy You Is No Loss.

Perhaps more than anything, most serious of all, it’s a failure of imagination.