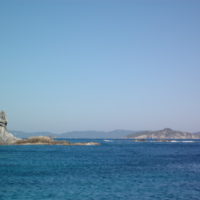 Fashion: the no longer young but still attractive woman, blonde, she’s had too much sun, in a short black leather skirts, sheer blouse, high heels, carrying a large, black leather weekend bag is a city bus driver and she is dressed for work.

Behavior: after a swim work out, it’s time for a cigarette – just outside the pool the swimmers mingle with the pool staff for a smoke. And when coming out of a movie, the exit is blocked because the moment people exit the cinema they stop to light up.

Time: if it comes down to doing something or hanging out, people here hang out.

Attitude: it’s not my problem, someone else will take care of it.

Fashion: the cut of men’s shirts in the torso is such that if you are 6’4″, the designer of the shirt does not assume you weigh 290lbs.

Fashion: the only suitable glasses are designer frames – there are no generic frames available.

Shopping: when shopping, you are assumed to be guilty of shoplifting until proven innocent, and therefore must show the contents of your pack, bag, purse, etc. when leaving a store. Credit to Karen Wheeler here for the guilty until proven innocent wording in this particular context.

Fashion: on t-shirts here’s there’s a sports logo for a team called the New York Redskins, but there’s no such team in the United States.

Civics: the city of La Garde has a weekly newsletter, a monthly magazine, and a pretty good web site. The publications serve as de facto campaign materials for the mayor, Jean Masson, whose picture must appear several time in each issue of each publication.

Fashion: the Union Jack is a slightly more popular fashion motif than the Stars and Stripes.

Shopping:  lines form behind each cash register, instead of one line forming and then the customer going to the next available cashier. You can count on getting in the line where the person right in front of you is returning an item, requiring the intercession of no less than four store employees, lasting at least ten minutes. Abandon all hope and woe unto you.

Civics: the city is converting some intersections that previously has traffic lights to traffic circles, and the circles are tastefully landscaped with stone and indigenous plants – a good thing. But the city also resurfaced a street and reworked the sidewalk here on the roche, our rock, thereby eliminating six parking places, in area where parking is in short supply.

Environment: there are plenty of recycling bins for glass, plastic, and paper, but it’s hard to find one for aluminum cans.

Home improvement: don’t use French primer or paint. Bring it from someplace else. Also plastic wire ties and duct tape are unusually expensive.

Design: the period on the French AZERTY keyboard  cannot be typed singly – it requires pressing the shift key while typing the key with the period. Why?

Cuisine: the French will eat bread with rice – that’s really not acceptable.

Design: when browsing in a book store, you need to turn your neck to the left to read the titles on the spines of books.

Design: normal light bulbs comes with threads to be screwed in or two Frankenstein style electrodes to be pushed in then turned. The lighting in any single room in the house will have a mix of these – it’s never just one or the other.

Design: most paper and notebooks for school in France are lined in the grid style – the kind you used in geometry class. It’s hard to find single ruled paper. And 3×5 note cards, or the metric equivalent, are impossible to find here.

Behavior: need someone to follow up on something? Don’t count on it here.

Miscellaneous: there’s an unusual number of English living in this neck of the woods. Not Welsh, not Scots, not Irish, but English.

Language: diesel fuel is also called gazole, which according to the etymology section of my Le Robert Collège 2012 dictionary, gazole is a francification (that sounds much worse than a word being anglicized) of the English gas + oil.

History: the Germans are still resented, and envied.

Misc: the French who are from this area really don’t understand how good they have it.

Cuisine: those garlic cloves that have been marinated in vinegar and some other evil, savory goodness, are sold by the tapinade guy at the market. Don’t buy them – they are worse than crack cocaine. That handful that you just shoved in your mouth, oh god it was so good, just cost you ten euros. Give me more now….

Behavior: the rules exist for you, not me, to follow, especially if you are a foreigner living here. For the rest of us… perhaps.

Déjà-vu: I’ve seen this view before, although it’s not exactly the same – it’s a variation on a theme. Previous instances are the view of the Ventanna Mountains running down to the Pacific Ocean south of Big Sur; or of the caldera from Firostefani on Thira (Santorini). Regardless,  when the land comes to the sea in such a fashion, your soul stops, but for the feeling and seeing, which presses on your heart in a happy, painful way. In this case I am treading water in the Mediterranean, which is cool and salty, but also fresh and wonderful, after I swam out from a secluded cove just off the Ile de Porquerolles. There was the slight sting on the shoulder from a jellyfish, but it’s no worse than a bee sting. The view at sea level is first of the water, then of the land with low mountains, the Maurins, then behind those, to the north and east are are the high, white chalky cliffs of the Coudron. It’s a panorama of water and trees and mountains and sky.  A few strokes away is the boat, and on board there’s some rosé to wash away the taste of salt  water, but I’m going to stay a little longer in the water.

One Response to Random observations