I’ve patched together some snippets from Skype and paragraphs from email.  Most have been written by Annie.

The beach and food

Marseille is getting better. The first few days I was really freaking out I thought “what did we get ourselves into?”  Everywhere we looked there were beggars and it felt like this was not the France  I love. But then we started exploring and found that they inhabit a very small area. Everything is very very close. As you move from one quarter to the next the mood and the ambiance changes dramatically.

Yesterday we went to the beach it is called plage des Catalans. Its a funky beach that can’t be more than the length of a football field. It’s funky in that it sits off the road and you can see high rises and cars passing. Catherine had a good time. it was not crowded at all. I read that in the summer it gets over crowded with sun bathers. Catherine ran around and played for a good hour. then we walked home.
On the way home we saw spied a sign that said “palais du Pharo” and walked through the gates. Then we were on a beautiful grass area and before us was a palace. Apparently it is the former home of Napoleon. It sits facing the water. On the front lawn off to the side there was a small park. Catherine played in it. It was full of children and families.
It was already six o’clock so we started walking home. It’s about a twenty minute walk so we took our time and enjoyed the scenery. We have to pass the marina which is full of boats and marina boutiques.
We picked up 2 pizzas on the way home. Now  I personally do NOT like pizza. I will eat it for convenience and for the kids but if i had a choice I would rather have anything else. But I have to say the pizzas here are not pizzas as I know it. They have a thin crust and many have no red sauce. I had a pizza tartiflette. It had mashed potatoes on it, carmelized onions, bacon bits, a cheese called racelette and for the base, Creme fraiche. OH MY GOD!. it was heaven. It could have been in a gourmet restaurant but this was street food. we ordered two pizzas on the street togo for 13 euroes. I think that’s around 20 dollars. We always buy a fresh baguette at night and for desert we had nutella on a baguette. Normally I don’t let the kids have so much desert but since we are walking miles everyday, I figure it should be fine.

The kids are having a good time and they enjoy the city and the ability to come and go and always have something to do. Catherine loves our strolls and loves the hustle and bustle.

Nearly one month along

I can’t believe it’s been almost a month since we we left your home. It feels like I’ve been bogged down with logistical things like setting up a bank account, school appointments, getting keys made, setting up electricity, getting wifi to work, meeting with the landlord, painting the living room blah blah blah.
We’re almost done now and I can say that we’ll be settled in with a routine very soon.
Catherine is right at home in France. She is as comfortable in French as she is in English. The home we are in has hardwood floors and the previous tenants left a little 3 wheel scooter which is called “UNE TROTINETTE” It has three wheels. One in the front and 2 in the back. it looks like the photo below. Catherine rides it around the house, down the hallway and in general to get around the house quickly. The one we have is not the Red Flyer brand you see below. It has a pirate on it and is called Joe Mouse. She’s getting quite good.

We are in the middle of a school holiday which lasts for 10 days from about October 23 to November 3rd. It is called Toussaints. i suppose we would know it as “All Saints”. It’s the equivalent to Halloween except all of France gets a 10 day vacation. Did you know Halloween was brought over to the U.S. by Irish Immigrants. ????

Catherine started school on Thursday after the holiday, November 3rd. I like Catherine’s school but I am not so sure about the boys school. I’m looking into an alternative for them. Private schools are rather cheap compared to prices in California and most likely Annapolis too. They are partially funded by the government which could account for the price difference. They are around 100 to 150 Euros per month per child.

Catherine’s school is called “Ecole Maternelle”. It’s the equivalent to preschool. It is free unlike in the U.S. where parents have to pay. She will attend school from 8:30 to 4:30 everyday. It seems like a long time. I am not used to being without her. SIGH. She needs the structure so we will see how it goes for her. She is sucking in information like a hungry sponge and school will give her all the learning she now craves. The boys’ French is getting better with every passing day as is mine. There are gaps in my French vocabulary that are getting filled in.
We are getting used to the area. As I said before, we are smack dab in the middle of the tourist section so it is quite animated. There are lots of bums and weirdo’s mixed among the general population. There are even Gypsy’s who I think come from Romania. They remind me of La Esmerelda from “The Hunchback of Notre Dame”.
We are finding our way through the city. Yesterday we went to the Antique quarter. A quaint little part of Marseille full of Antique shops. We found a toy shop on the way home so I bought Catherine a little toy laptop. It’s not really a laptop. It has learning games on it. A little voice calls out little instructions in French like “Find the letter F”. Trouver le lettre F.  it does colors, numbers, shapes, directions yada yada. All in French, perfect for Catherine’s Age. She loves it.
Today is Sunday. Not much happens on sundays so we may go to a small park located at the “palace Du Pharo”. It is a small palace Napoleon the III built for his wife. The land it’self was given to Napoleon the 3rd by the city of Marseille.
This palace has a spectacular setting.  It overlooks the water and you can see “The Chateau d’if. This chateau is set on a small island which happens to be mentioned in the book “The count of Monte Cristo”. I believe it is where Dante is held prisoner.
You can see the island and chateau if you stand behind the palace du Pharo. There are boats that take you out to the Island to see the chateau D’IF. Pictured below. We may also check to see if there are boats leaving today. If the weather permits, we will take one of the tours to see it.. I say weather because there is a horrible cold wind here called “THE MISTRAL”

The Mistral is an extremely STRONG wind that blows in from the north. It speeds up when it hits land usually wind that happens only in the south of France and can occur at any time.  First picture below is of the Chateau D’IF in the middle of the Mistral Wind. The second is near the Old Port near our home. Some days the wind is too strong here and it’s not advised to be walking around town. Not because it’s dangerous, but more because it’s uncomfortable and the wind gives it a cold chill. I don’t have any foul weather gear to wear nor would I want to walk around with the wind blowing. It blew off our neighbors shutters the other night. The wind doesn’t happen very often. It’s only happened twice since we been here. And it’s rained twice also. Galoshes are in order I think.. 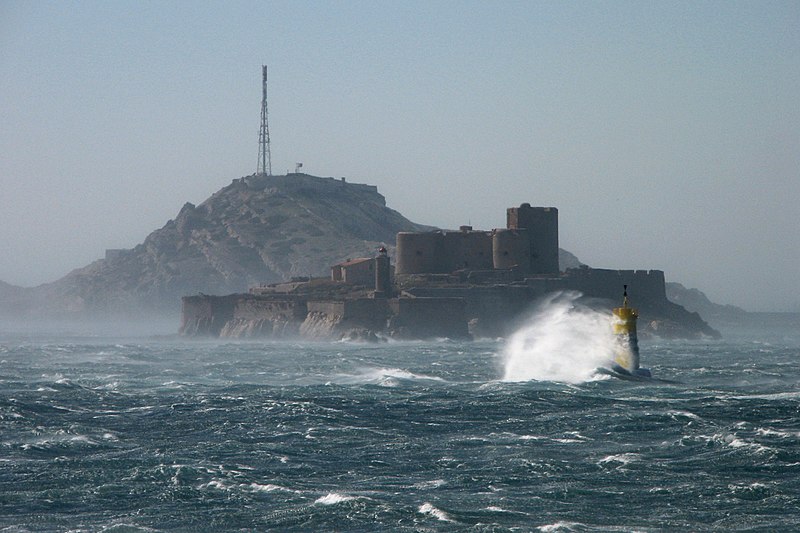 The Enormous Network
We walked around, it was wail'n, etc.
Summer Photos 2022
Al's Understudies
February photo round-up
Moments in Montpellier

Lullaby for a Narcoleptic
Things left undone: five years in France
The Sailing Classroom
In the beginning it was never better
The End of the Affair
The Children's Crusade
Interview: Ambassade des Vins
The End of Serendipity
France Annoyances: Banking

Guns n'cheerleaders
In search of lost velo
The morning wind is warm and dry
Berlin pictures
Ich bin Berliner
Au revoir Marseille
Why do you live where you live?
Diversions
Routines
Off the grid
The customs of the country
Tuesday morning: Cafe Dugommier lounge music
Should it stay or should it go?
San Francisco vs. Marseille
From Marseille to Maugansville
Accessorizing your bidet