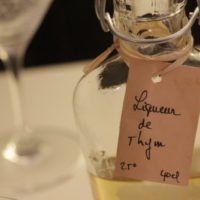 Growing up I don’t recall undue adoration given over to food, and more broadly cuisine, and there was a reason: there wasn’t a lot going on in the American kitchen.

In those days ethnic food consisted of carry out Mexican from Tippy’s Taco House in Arlington (Virginia), Chung King frozen eggrolls, and maybe in the summer a cucumber and cream cheese sandwich in something called ‘pita’ bread, along with a cold soup called gazpacho. The beer was Michelob, the wine was Almaden or Blue Nun or Mateuse Rose (‘hey hey hey’), and the water was either tap or Perrier, which my mother insisted on pronouncing as it was spelled (as was true of most French words – she did know better, but that’s how she was). Food was regional, but not so much in cooking, as in availability: if my sister’s friends knew we were travelling to Texas to visit family, they would ask her to bring back Coors beer; and the summer I spent in Wyoming they guys there asked me if I had brought any Stroh’s from the East (I hadn’t).

In my mother’s kitchen was The Joy of Cooking, one or two of those Time-Life book series volume editions things (Viennese Pastries, maybe), and my mother subscribed to Gourmet Magazine, but I what I remember from leafing through that, while waiting for my brother to finish with the latest Car and Driver, were advertisements for orange liqueurs from Israel and Cadillac Eldorados.

To be sure it was not all bland and tasteless, and a few highlights stand out: crabs from the Chesapeake Bay, steamed and caked in Old Bay; an occasional Smithfield ham, so salty that you woke up in the night dehydrated; and the large salmon platter and cheese ball from the Fort Belvoir Officer’s club, which my mother ordered for her dinner parties

Nor was this true when the Elders were on vacation. During our annual trip to Vermont, between Christmas and New Year’s, there were opportunities to eat at some excellent restaurants: the Fire and Ice (pork chops stuff with oysters, and café liégeois for dessert), the Bakery Lane Soup Bowl, Mr. Up’s, the Middlebury Inn, and the Waybury Inn (great beef stroganoff and bread so good that my sister would order extra portions then wrap it in a napkin and stuff it into her purse to take back to the hotel). On trips to Texas for family reunions, we ate some great Mexican food, but had to be careful where we stopped to eat, because some counties were dry, and not having a cold beer with Mexican food was an abomination.

The dawning of the age of Epicurus

In the last decades of the 20th century it all began to change. Some intersection of celebrity chefs and their restaurants, the food and cooking media (books, magazines, television, movies), and the culinary-industrial complex brought us, among so many other manifestations:  Alice Waters, Fine Cooking magazine, and Barbeques Galore. New adjective’s were added to food descriptions: organic, local, regional, seasonal, artisan, craft, free range, and for the fundamentalists, macrobiotic, vegan, and biodynamic. In my mother’s house there were now new cookbooks such as Laurel’s Kitchen and The Moosewood Cookbook; the beer became Beck’s, the wine slightly upgraded to Gallo.

About this time I moved to the San Francisco area, where in addition to this growing culinary trend was the opportunity to snarffle up the cuisine from Asia and Mexico. For the next twenty-five years, while a worker bee at software companies, I ate carnitas plates, kim-chee with Mongolian beef, pad-thai, ceviche, chicken vindaloo, gorditas, and most of the stuff out of the Pacific Ocean, cooked or not. The food was served at unlikely places such as the Thai Bistro or Indian Haus Buffet or Mexican roach coach or Chez Joe. Rice could be jasmine, basmati, suishi, barely, or arborio for risotto. I drank wine from California, Oregon, Washington, Australia, and Chile; I drank beer from just about everywhere, and as I write this I could really, really use a frosty Sierra Nevada Pale Ale. For caffeine there was harmutty tea from that trendy tea place in Palo Alto, cayenne spiced hot chocolate two doors down from the tea place, and best and most missed of all, Peet’s French Roast.

The varieties of culinary experience in the Bay Area were unique and wonderful: California cuisine and Pacific Rim and Asian fusion and straight ethnic: indeed, where else but San Francisco could you find an Italian Vietnamese restaurant? In On the Road, Jack Kerouac wrote:

In the window I smelled all the food of San Francisco. There were seafood places out there where the buns were hot, and the baskets were good enough to eat, too; where the menus themselves were soft with foody esculence as though dipped in hot broths and roasted dry and good enough to eat, too. Just show me the bluefish spangle on a seafood menu and I’d eat it; let me smell the drawn butter and lobster claws. There were places where they specialized in thick red roast beef au jus, or roast chicken basted in wine. There were places where hamburgers sizzled on grills and the coffee was only a nickel. And oh, that pan-fried chow mein flavored air that blew into my room from Chinatown, vying with the spaghetti sauces of North Beach, the soft-shell crab of Fishermans’ Wharf – nay, the ribs of Fillmore turning on spits! Throw in the Market Street chili beans, redhot, and french-fried potatoes of the Embarcadero wino night, and steamed clams from Sausalito across the bay, and that’s my ah-dream of San Francisco. Add fog, hunger-making raw fog, and the throb of neons in the soft night, the clack of high-heeled beauties, white doves in a Chinese grocery window…

After living in the Bay Area for many years, some places are easier to move to than others. Given its similar climate and culinary tradition, we thought the south of France an ideal destination after life in California – that turned out to be only somewhat true.

‘Dessert without cheese is like a pretty girl with only one eye.’ – Brillat-Savarin, Meditations (1825)*

A story that encapsulates the French and their food. Before we moved to France, a friend who had lived in Grenoble for several years said that whenever he bought a cut of meat from the local boucher, the butcher never failed to politely but firmly provide instructions on the proper way, and by inference the only way, to prepare whatever was bought. To be sure the instructions were correct and no doubt the resulting dish was good, but for the French there is only one way – their way. And the butcher clearly felt it important to prevent this ignorant foreigner from ruining a good cut of meat.

When I first heard it, I thought this story a bit of hyperbole, but after nearly three years here and many similar experiences, it is an accurate example of the French and their relationship to their food. All native born French that we have met are very particular about the food they eat: how it is prepared, the order of dishes, the spices used, and the presentation. This is true for all French over the age of eight and regardless of socio-economic background. Our friends and associates fall somewhere within the spectrum of middle class: restaurant owners, store managers, technology managers, and so on; and although we are in the south of France, many come from other parts of the country, but they are all bound by the same culinary conventions just as they all speak the same language. In particular:

Within its narrow range, French cuisine is very good. We like cassoulet, coq au vin, moules frites, bouillabaisse, and steak-tartare. Emergency food is usually some sausage: chipolte, mergueze, or Toulouse on a baguette, and that’s always tasty. And while the red and white wine here are great, what is absolutely wonderful is the availability of rosé – we live in the region of France that produces the best rosé, and we drink quite a bit of it.

The good cuisine of some countries often comes from their former colonies: think of Indian food in England or Indonesian food in the Netherlands. That’s not the case in France.

If you come from the Bay Area or any other large North American metropolitan area, in France you will be disappointed in the Asian food. In the New World the lack of an established culinary tradition means that the traditions and habits of the old world can be continued unchanged in the new. But given France’s culinary tradition and because the French are so narrow in their cuisine and taste, it is impossible to find an authentically good Asian restaurant here – any real Asian restaurant would soon go out of business. This means there is no savory Vietnamese pho, no spicy Thai food, no DefCon 3 nuclear green curry hurts so good chicken vindaloo.

At a Thai restaurant in France ordering a very spicy dish will result in at best a savory dish. In contrast, in San Jose I remember ordering a dish at a Thai restaurant that was labelled with two chilies (out of a possible three), whereupon the Thai waitress looked at me a moment then advised me to order something else. She was right – I could barely eat a dish rated with just one chili.

There’s nothing to be found in France as we have in the United States: the wonderful Japanese pork broth ramen soup at Santa Ramen (San Mateo), the delicious Shangainese steamed dumplings from Happy Cafe (also San Mateo), the agedashi tofu from Yakko’s (Mountain View), the tasty rolls from Suisha (Redwood City) or Sushi Zen (San Jose),  the Korean dolsot bibimbap (Hanover, New Hampshire), the Baltimore Roll, sprinkled with Old Bay, from Cafe Kyoko (Frederick, Maryland), the Indian chicken vindaloo from the Bombay Club (Washington, D.C.), or the pho from your favorite hole in the wall Vietnamese restaurant.

This is especially annoying for Annie, who lives on Asian food. She was born in Thailand and spent her first five years there; her step-mother was from Taiwan, and she spent three years working in Japan and travelling in the Far East. The good news is we’ve found a very good Asian food store near us, and while the Sriracha that they sell there is not quite as strong as that in the United States, we’re able to find most ingredients necessary for sizzling rice soup or Thai beef salad. Indeed,  I think the best Asian restaurant in Var, perhaps all of the south of France, is at our house.

Mastering the art of living with French cooking

It could be worse: we could be in England or Germany, but it could be better: Spain comes to mind. But to paraphrase Clint Eastwood from Heartbreak Ridge, we improvise, adapt, and overcome.  It’s a mixed bag:

Mornings during the school week the kids have cereal or toast with Nutella, maybe for Catherine an egg fried in soy sauce; on weekends there are omelettes or crepes, especially if there has been a sleep over, or perhaps potatoes cooked in soubressade forte, a spicey smokey sausage, a French cousin to chorizo or linguicia. Coffee is made from an espresso blend, very strong, in a press, or piston as the French call it. Lunch might be leftovers, but weekends, given that we are in the center of town, near the market, there are often guests who happen to stop by, so it’s a rosemary chicken or two with baguettes and rosé. Dinner is jasmine rice (made in the dedicated rice cooker we bought at the Asian store), green beans sauteed with minced garlic in oyster sauce, and  beef slices, cut thin, pounded, then doused with lime and herbs. The wine pairing is a lighter red, maybe a Fitou, and afterwards, a bit of armangac.

* As read in Jacques Barzun’s From Dawn To Decadence