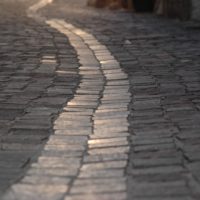 We live in the vieille ville of La Garde, the old village. The village is built on a rocky hill, which rises from the surrounding plain. At the top of the hill, also called the roche, or rock,  are a church and the ruins of an old castle – a single stone tower, which looks like a rook on a chess board. The oldest buildings on the hill date back to medieval times.

The original city hall is just three doors down, and the date on the stone entablature over the door reads 1729.

Most of the narrow streets in the vieille ville  are paved with stones, and in the middle is a gutter made from granite. The  gutter is slightly recessed, so water, from either rain or plants being watered, flows down the middle of the street. The surface of the granite is much smoother than the rest of the street, and it becomes slick when wet – I’ve almost crashed on my bike when riding too fast on a wet gutter.

Residents co-exists in very close proximity to each other. Since we live in a townhouse, the left and right of our house joins with the neighbors’s houses. The street in front of our house is less than ten feet wide, and across the way the townhouses are subdivided from single family homes into apartments. The back of our home opens to a courtyard, and windows from at least five different households open on to that space.

The summer is ending now: the days are noticeably shorter, and the mistral has started blowing again. But during July and August the windows were always open in an effort to at least keep the inside air moving, even if it did not cool the house; we have no air conditioning. The open windows let in more than the breeze – the sounds of the old village and beyond also come in. What I hear depends on the time of day and where I am sitting.

Our ground floor is one open room: foyer, dining area, kitchen, and living room. A window by the kitchen opens on to our street, rue Doumet. On the opposite wall at the back of our home a window opens onto the shared courtyard.

Out the back window and across the courtyard, directly opposite our home, is the townhome of a woman in her early forties, who lives with her elderly mother and her daughter, who I guess to be nine years old. I see the mother at the market down in the Place de la Republique: she is always well dressed in a long skirt and white blouse, and her white hair neatly tied up, often in a silver clasp. The young daughter stays at home because she is in some way mentally hindered. Her voice had an odd pitch and high nasal sound, and we can always hear it clearly. On more difficult days she utters a sort of chant that sounds sad.

From other parts of the courtyard we sometimes hear a fight between a man and a woman, the woman talking fast and loud, the man more quietly. They may close a window, but often the heat, I suppose, forces them to re-open it. Once in a while we’ll also hear the sounds of a reconciliation, with a steady voice increasing in tempo and volume.

From the courtyard I’ll sometimes hear someone playing the piano. I assume it is our neighbor to the right, who is a music teacher at the College Jacques Cousteau, here in La Garde. In the past I’ve talked to him about buying a digital piano, where to get sheet music, and where to get lessons. He says he also has a digital piano, but he’s not a very good player. It sounds fine to me, and I look forward to being not as good as he.

From the front window I sometimes hear a cry of fear, then it turns into a woman crying. It is always the same woman, who lives down the street, and whom I assume suffers from dementia or Alzheimer’s. She is in her late sixties, and she must have been pretty when she was younger, because even now she is still slender in her dresses, her grey hair falls nicely over her shoulders, and if you can see beyond the tragedy now in her face, there’s a trace of beauty still there. Her husband is always with her, often holding her by an elbow and his arm around her shoulders. He looks to be a few years older, and it goes hard with him. I think they have lived in the village for a long time, but now their house is listed for sale. His face is etched with grief, but he always greets us with a ‘Bonjour‘ when walking by.

On the second floor through the windows in the front of the house I hear the neighbor across the street watching a game on television. I assume it must be a soccer game, but it could also be a rugby game: the Rugby Club of Toulon is very popular here, and is one of the best teams in Europe.

Also from the second floor, usually at night, there are sounds of a different set of neighbors fighting. I assume this couple works during the day, and they save their fights for very late at night.  If it goes on for too long, a loud closing of the shutters is enough of a signal for them to be quiet, and usually one of them will offer a ‘Pardon‘ to anyone within earshot.

The third floor I don’t spend my time on. The Yamaha keyboard is set up there, but it sits in the hallway, between the front and back windows, and is removed from the street and courtyard sounds. Our shower is on this floor, but it has no windows.

Our suitcases, empty boxes,  and my office take up the top floor, an attic with a sloping ceiling. There are two windows here, one faces due west and the other, to the left of where I sit, is due south. From the south facing window, several times a day, I hear the trains pass by. The train is usually going from Toulon in the direction of Nice, although it may turn south and go to Hyeres.  The trains are either the faster moving TGV or the slower, regional train, the TER.

In the mornings during the week, about 8:50, I hear a scooter drive up the lane, stop, the motor shut off, then the sound of security chains being attached to the wheels,  then the chains drop onto the stone street.

On hotter days a buzzing a wasp or fly comes in the window. It flies erratically into the attic from the south window, and buzzes around and bounces off the west window, which I keep closed and covered with a large green leaf from Ikea – the leaf blocks the view and therefore reduces the distraction,  and it also cuts glare of the west window. If the wind it not blowing too hard through the south window, the insect in question eventually makes it outside again.

In the hours between 6:00 A.M and midnight, I hear the bell tower chime each hour, twice.

Four days a week, once in the morning and once in the afternoon, I hear shrieks and screams rising up from the town to my office. It is the best sound. When I hear it I stop what I am doing and just listen. It is recess at the elementary school, and it is the sound of children playing.