On December 2nd, the University of Vermont announced that it would cut END_OF_DOCUMENT_TOKEN_TO_BE_REPLACED

I was talking to Lukas when I noticed I wasn’t feeling well; END_OF_DOCUMENT_TOKEN_TO_BE_REPLACED

In the original Star Trek series, “This Side of Paradise” (season one, END_OF_DOCUMENT_TOKEN_TO_BE_REPLACED

The second in an infrequent series of interviews. The previous one is here.

Wine. Vin. Wein. Vinho. It’s been around a while – a long time ago some Armenians figured out how to make wine, harvesting grapes at just the right time, smashing them together, followed by cycles of straining and storing. It’s a part of culture and religion – the Greeks dedicated a god to the drink, Bacchus, and for the Christians, at least those who consult the King James version of the Bible, wine is mentioned in thirty-four of the thirty-nine books in the Old Testament (it’s missing from Ruth, Kings I, Obadiah, Jonah, and Malachi); however, in the New Testament wine makes an appearance in less than half of the twenty-seven books. It’s more than a drink – in the United States, in rarefied circles, wine, whether one owns a particular bottle or an entire vineyard, is not only a beverage but also a status symbol along with cars, watches, pens, and boats.

Other alcohols have a lessor status: there are no gods of beer, gin is not served at communion, and cider isn’t very inspiring, either as a beverage, status symbol, or the setting for a movie (Ciderways?).

Growing up drinking was done solely to get messed up, and that meant drinking beer, lots and lots of beer. I occasionally tried some of the Almaden white wine my mother bought, this was back in the American culinary dark ages, but I didn’t care for it. I had tried red wine at a younger age, when as an acolyte at Grace Episcopal Church where my family went, after one service I had to help polish off any remaining communion leftovers: I was given a stack of really dry wafers, also known as the body of Christ, to eat, chased down by a chalice of Burgundy – it was a bit young, fruity. For the most part I came late to liking wine, and my first distinct memory of really enjoying it was when a girlfriend took me to an Italian restaurant in San Francisco’s North Beach, Grazie (sadly long gone), and we had a bottle of Machiavelli chianti – quite good. Some years later I tried making wine, but the results were a disaster, resulting in thirty gallons of bad red wine vinegar. But learning about the wine making process was fun, and the work – from pitch forking the grapes off the vine into the stemmer/crusher, to racking the big glass jugs (carboys) every few months – was a nice change from the cerebral software industry.

While our little town of La Garde is lacking in many things, it is not with regard to a wine store. The local supermarket sells a lot of wine, but my favorite place to go is a one minute walk away, the cave known as the Ambassade des Vins, owned by Guylaine Gennari. The cave is both a wine store and a flower shop, and I go there several times a week to buy wine. It’s fun just to go in and browse. It’s a small store, maybe 400 square feet: about a quarter of the space is given over to plants, and the rest for bottles of wine, whiskey, and rum, on shelves and in wooden bins; there’s also an area where there are stacks of cubis, wine in a carton (there’s no shame in this and the wine from these is quite good), and separately a closet size refrigerator for both exotic plants and for white wines and rosés, in case you don’t have time to chill the wine before drinking. There’s usually a hint of cigarette in the air, as Guylaine smokes in the back room.

She is tall, in her mid-forties, has a crisp yet friendly manner, and is very busy: her store is closed only on Wednesday and Sunday afternoons, otherwise the Ambassade is open and there are always customers in there, and on special holidays, all her floor space is taken up for flower orders. Our interview was on a Thursday evening in the cave, and Angela Green was once again on hand to translate – thank you Angela. Because I could not conduct the interview directly with Guylaine, the replies are not verbatim, but rather my summary. Any inaccuracies are my error, and not those of Angela or Guylaine.

Where are you from?

I was born in Marseille, but when I was just a few months old I moved to Spain. My parents were from Spain and I grew up speaking Spanish. We lived in the Provincia de València. When I was four years old we moved back to France.

How did you come to live in the La Garde area, and when did you move here?

I moved to the area in 1994 when my companion moved here.

What did you do before you opened your wine store and why did you decided to open a wine store?

When we first moved to the area I opened up a florist shop in La Garde, right across the street from the cave. The cave has been here for over seventy years, and has always been a wine store. The original name was the Chais Baccus, but it was changed by a former owner. The previous owner was a friend of mine, and when she retired, I took over the store. It looked like a good business opportunity.

Did anyone try to dissuade you from taking over the wine store?

No one in my family tried to because they knew I was too stubborn and would not listen to them. However, my accountant did. He said it did not make financial sense to take over the cave. He was right, it still doesn’t, but I don’t care.

Did you have any special training or education with regard to wine?

No, none at all, Just my own interest and on the job learning.

Do you have any employees?

Yes, just one, to help me with deliveries and in the store when we are especially busy.

Do you go to any tastings or industry related events?

Not very often because I am too busy in the store. Only occasionally. And of course it’s sometimes hard to come home after a wine tasting.

How do you decided what wines to stock?

Several ways. Of course there is what I myself like to drink and prefer, but also what the customers buy or request. Then there are also the sales reps – if they are agreeable and not pushy and their wine is good, I am more likely to buy from them than if they are too aggressive.

What do you sell the most of?

It’s almost a split. I sell a lot of wine from Provence, both red wine and rosé are equally popular. A close second to the wine from Provence is wine from Bordeaux. However, what’s interesting is that up until about four years ago, I sold more wine from Burgundy than Bordeaux. However, there were several years of bad harvests and low production, which drove up the price of Burgundy. As a result of this increased price, I started selling more Bordeaux wine.

What are your preferred wines from the area?

I especially like the wines from Domaine de la Navicelle in Le Pradet [a town next to La Garde].

Do your stock any foreign wine?

None at all. Of course the rum and whiskey are from aboard, but for wine itself it is all French – we are somewhat biased.

One of the local restaurants serves wine from Chile and I’ve enjoyed those. When I first took over the cave there were wines from Australia in stock, and those were good, but I don’t carry those anymore. Also, Domaine de Rimauresq, whose wines I carry, is owned by an English lord, who also owns a vineyard in Australia. I tried his Australian wines and they were good.

Have you tried any wines from the United States?

What is the most expensive bottle you have sold?

There are two that went for about the same price. One was not a wine but a whiskey, a 37 years old Campbelltown. The other was a 1944 Armagnac. Both sold for about 400€.

What’s the last wine you want to drink before you die?

A Graves from Bordeaux, the AOC ( Appellation d’Origine Contrôlée) is Pessac Léognan.

Where are you in five years?

Still in the area running the shop. I have children in school so they keep us here for now. 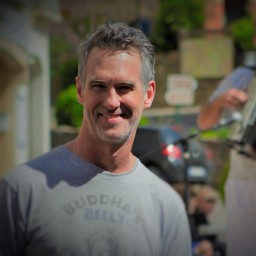