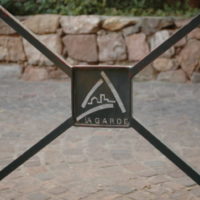 Four days a week, once in the morning and once in the afternoon, I hear shrieks
and screams rising up from the town to my office. It is the best sound. When I hear
it I stop what I am doing and just listen. It is recess at the elementary school,
and it is the sound of children playing.

I still hear those sounds, happily, and I never get tired of hearing the children play. It’s been almost three years since I wrote that, and almost four years since we moved to La Garde. This is our last month here  – at the beginning of July we are moving: a new town, Montpellier, in a new department, Hérault, in a new region, Languedoc-Roussillon. We’re leaving because we think this will be our last year in France, and if so we want to be someplace more cosmopolitan, where there is more going on. La Garde is fine if you are French or have family here or your work is here – we have none of these. Still, in August, 2012 when we we left Marseille it was easy, but this time is harder: we’re leaving behind friends and familiarity.

There have been some changes since we arrived.

Beyond the rock which is the old village, there is the rest of the town is, at least two intersections have been converted from four way stops with a traffic light to a rond-point (regular readers know I favor rond-points whenever possible). In the centre ville there are still too many sandwich shops, real estate agents, and hair stylists; however there is now a bookstore, the L’Atoll Imaginaire (read the interview here), which will move to a new location just down the street from us, sometime in early September. Several pizza restaurants have opened and closed, and now there is a traditional restaurant nearby, Bistrot de la Fontaine, but I’m skeptical it will last. A fromargerie, a cheese shop, opened on the Place de la République.  There is a fancy new mall that has a Brueggers’s Bagels, a bagel shop chain from the United States, and a store selling 400€ English mens’ dress shoes. A wetlands eco-park is being built on the south part of town.

On the rock itself  where the old village sits, there have also been changes. At the very top of the hill the paths were repaved with new stones, and a Parisian style green cast iron fountain was installed – perfect for dousing your head after a hike up to the top on a hot day. A flag pole was added to the castle ruins at the top of the rock, and it flies the flags of France and our region Provence-Alpes-Côte d’Azur.

Lower down the city upgraded the street lights to a more modern light, much brighter – a white/blue light instead of the previous old orange/yellow, which at night gave the streets a decidedly medieval look. Because the city pays for half the cost,  many homes have been refinished: the old exterior stucco scrapped off, patched, and painted – usually the shutters and trim are done at the same time. One house was done in a sort of ochre with blue trim; our next door neighbors came out rather ugly: the pale yellow walls are fine, but the contrasting pale green shutters and trim are nauseating. Many of the buildings have had their exteriors redone, also the city hall, and also the church in town.

The fountain in a small place near our home, we can hear the water at night, was drained, scrubbed, refinished, then refilled, and the water is a now a shade of clean light blue, not green.

We’ve kept some neighbors and lost others. The house to our left we still hardly know the family there.  On the other side we still hear the piano and Greek guitar music – the music teacher from the local college, middle school.  He had an American girlfriend for a while – a college graduate who came here to work as an assistant at the local middle school was staying at his place and it looks like one thing lead to another.

The troubled girl across the courtyard with her mother and grandmother we still hear once in a while, in her sad and confused voice, asking her mother something: Mama? Mama? I haven’t seen the grandmother for a while, and when I did last see her she looked very very frail, but still well dressed.

The pretty woman immediately across the street moved out and there have been several occupants since: a young couple who stayed only a few months, an older guy who smoked in the street, and mostly recent a single woman, retired, would lived in Marseille. It’s odd she is retired as she is only in her early fifties, but I’ve noticed there are a number of relatively young retirees here.  The apartment above was occupied by a young guy, Kevin, who was friendly enough, but one day lost his job, then a few months later disappeared, and after a day or two a couple of tough looking mover bouncer guys came in and took all the furniture out of the apartment and it has been vacant ever since. Not far away is annoying guy who talks all night – does he work? His voice broadcasts at a special frequency that penetrates all stone, glass, and other solid material. Once they had a party until 2:30am – very loud, would not shut up until I yelled out the window, then they quieted, but still seemed offended. Not to be outdone, a few doors down the other way is a couple with on again off again fights, usually after midnight, sometimes punctuated by the sound of glass breaking and screaming.

A few random milestones:  it snowed our first winter here, in early 2013; Annie ran a 10k;  we bought a car; we acquired a rather disloyal cat. All our visitors were from either New Hampshire (Marty and Josh and Dave and Bee) or North Carolina (Jean and Paul – twice). We hope to see them in Montpellier.

One older couple who lived right around the corner has moved out, but we still see them in town. From 2013:

From the front window I sometimes hear a cry of fear, then it turns into a woman crying. It is always the same woman, who lives down the street, and whom I assume suffers from dementia or Alzheimer’s. She is in her late sixties, and she must have been pretty when she was younger, because even now she is still slender in her dresses, her grey hair falls nicely over her shoulders, and if you can see beyond the tragedy now in her face, there’s a trace of beauty still there. Her husband is always with her, often holding her by an elbow and his arm around her shoulders. He looks to be a few years older, and it goes hard with him. I think they have lived in the village for a long time, but now their house is listed for sale. His face is etched with grief, but he always greets us with a ‘Bonjour‘ when walking by.

She has not improved, but physically she seems fine; he seems healthy, but now nearly blind, and carries a stick to help navigate what she might see, but not understand. I still see them once in a while, he’s leading her, sometimes handing her a children’s apple sauce to eat, or talking with a young woman at our local bakery, his head slightly turned to better focus his listening.

The last time I saw them was Sunday morning, already warm, the town still and quiet.  The man and woman were slowly walking along the sidewalk, and they had come to a small step that was giving her problems – she couldn’t get up the step and was crying. He touched his fingers to her lips and stroked her back, but she remained anxious. Then it was all right – a young woman, daughter or daughter in law, came to her aid, got them up the step, and then they continued on their own. The young woman then walked a little bit ahead, and joined her husband, and another couple. Around the two younger couples three toddlers circled like bees near an apiary. Further back in the family convoy the old couple walked, not far behind. She was wearing a pretty colorful spring dress, he carried the youngest grandchild in one of those child sherpa backpack rigs. In one hand she held an empty blue Ikea bag, and with the other she held her husband’s hand.

One Response to The End of the Affair